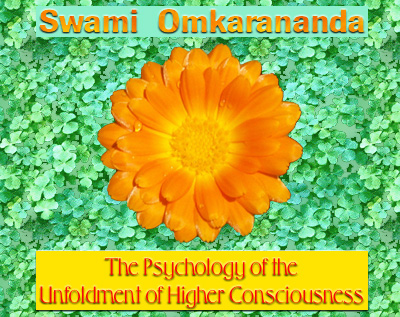 Body is Yours, You are not the Body's

You are More than the Body and Mind

Unfoldment of the Higher Consciousness

Thought-Power and the Higher Consciousness

Thought and Beyond Thought

Experience of the Divine Consciousness

Blessedness and Types of Self-Identification

You Remain for Ever and Ever

What is a Divine Sage?

Master the Science of Consciousness

How to Know the Stage of our Evolution

The Consummation of Evolution

Comment: The Design between each chapter leads back to the index.

When we look at the world and life, through the eyes of a highly developed and universal intelligence, a Plato, or feel the rhythms of the spiritual Presence in all existence, through the heart of a St. Francis of Assisi, or survey the starlit skies, through the eyes of a modern astronomer, or look at the depths of our mind, through the eyes of the depth psychologists, or see ourselves in terms of the findings of the parapsychologists, or study the Idea of Man presented by the European Idealists, - we have the largest perspectives, wider horizons to behold a better view of ourselves, a deeper sense of the meaning, value, and the possibilities of the fulfilment, of life on earth, and to that extent the higher sensibilities that are other than the physical means of knowledge, come into operation.

Man does not live by bread alone. He lives by the wondrous, creative, sustaining energies of the timeless and infinite God within and all around him, which express themselves as the sparkle in his eye, the brilliance in his intelligence, the love in his heart, the faith in his soul, the aspirations of his psychic being, the search for the Beautiful, the Good, the Truth, the longing for peace and joy. Bread is the need of the body. Neither bread nor even the body is indispensable to the Spirit within.

Spiritual hunger continues even if this physical body is cast off. Unless this innate hunger for knowledge and perfection is appeased, one cannot hope to have any real rest.

Amidst the din and boisterous bustle of worldly activities, there come moments of tranquillity and peace, when the mind for the time being, however short it may be, soars above the worldly things and reflects on the higher problems of life, the "Whence", "Where", "Whither", "Why" of the universe, - "Who am I?"

The sincere inquirer becomes serious and extends his reflections. He begins to search and understand the Truth. Discrimination dawns on him. He seeks concentration, meditation and purification of the mind and body, and eventually attains the highest knowledge of the Self, or the experience of God.

Body is Yours, You are not the Body's

In deep sleep you have no bodily awareness; you are independent of the body; you have a joy that comes not from the body, but from your own inner self. When you are absorbed in some artistic or scientific work, you transcend bodily experience. In dream-state, you dispense with the body, and roam about with another body called dream-body. Those who are masters of higher Yoga-techniques, project their astral body, and move about. Those who are completely divine and have highest experiences of God, discard their physical body, at will, and assume a divine body.

Your body ages and becomes ugly, but not your Consciousness. When your span of life on earth is over, and you shift your scene, your body is left behind and rejected.

When you have mental health, your bodily health improves. When you are happy, your body becomes better. Body is not great. The mind in it is great. The will in it is unbreakable. The spirit in it is imperishable. Be that mind, will, spirit. You will conquer all bodily difficulties, problems and death.

You are More than the Body and Mind

Be a mind, not all body. Be a heart, not all mind. Be the Consciousness, radiant, luminous, calm, clear-eyed, blissful, not merely body, mind and heart.

Unfoldment of the Higher Consciousness

When all in us has been rendered refined, noble, luminous and sensitive to the Grace of the all-seeing Godhead, then the inner gifts in form of intuition, immediate experience and transcendental powers and capacities of Consciousness, grow active. Wherever we go, we walk in the divine Light, with the endless Wisdom of God in our hearts, and we shall express the Love which is all-embracing, all-comprising and infinite. Then our lives become a playground of Cosmic Consciousness.

Cosmic Consciousness is our normal state. The limitations and the defectiveness of human consciousness and human experience are not natural to us. They are subnormal. Our bodily limitations are not enduring for long, but as long as we are encased in them, we experience error, misfortune and forlornness. To the extent we move from the limitations of human consciousness, lift up our feelings and enlarge our narrow desires into a great love, to the extent we are capable of broadening our narrow attitude into a grand vision, we become capable of reaching Cosmic Consciousness, which is already in our inner being.

Thought-Power and the Higher Consciousness

Our thoughts are responsible for all our perfections and imperfections. "We reap what we sow". "As we think so we become". Not God, but our own thought, will, action, attitude, make imperfections, difficulties, trials, problems, suffering, evil. God has breathed His Breath, His Life into us, and has created us after His Image, His Consciousness, His Perfection.

He has breathed into us His all-loving, wonderful, all-perfect Light, given Himself completely into our inner being, has built into every part, every tiniest part of our inmost being, His whole Perfection. Therefore, each little point in us is joy, peace, perfection, happiness and bliss. When we meet difficulties and sin, when peace evades us, it is because of our thoughts. As soon as we are cut off, in our inner thought and awareness, from God's infinite Perfections, we experience imperfection.

Thought and Beyond Thought

The aspirant is never preoccupied with either psychological or parapsychological realities and powers. He is required to transcend thought, and reject paranormal powers that may be given him during the processes of such an effort. After satisfying the preconditions, the aspirant is asked to let his whole purified being possess a knowledge of the divine Consciousness, by communion, by experience and identity.

The lover of God, the seeker of Truth, has a firm grasp of the origin, the nature and the boundaries of thought. Thought, he knows, is a creator of fictitious realities. To deal with thought is not his aim, but to let the higher creative Divine Consciousness work through him, not only for turning his own life into a world of divine peace, joy, power and perfection, but also for enriching and illuminating the world he lives in.

Experience of the Divine Consciousness

Blessedness and Types of Self-Identification

When the police reports that Mr. Walter's dog is killed, we don't react, and we ignore it. When someone tells us that our dog is killed, we are at once very sad. This is so because we have identified ourselves with our dog. That makes the whole difference. When we are deeply absorbed in reading a novel, and identify ourselves with the events depicted therein, we do not feel the little pain in the leg, or notice the squirrel jump over our body. This self-identification with the events in the book, lifts us above bodily and environmental consciousness.

The most wonderful and best of the many forms of self-identification is when in our absorption in the adoration of the living, talking, all-beautiful Divine Consciousness, we are identified with its Nature, its Perfection, its Light. Identification with our own body, or possessions, or persons, can be dangerous and destroy our peace, happiness and progress. Beloved of God, aim at this self-identification, and you shall be immortal.

You Remain for Ever and Ever

Either by rich wisdom, or by ripe experience of life, either by faith, or by divine love, either by an examination of the statements of men of God-experience, or by personal evolution, - know that you, as the Image of God, remain for ever and ever, while all about you rises and passes away.

What is a Divine Sage?

The regard and attention of a sage are constantly given to spiritual Consciousness latent in men and in things. A cosmic vision rules his outlook. A spiritual sight seeks a constant exercise through his eyes and thought. Divine impulses seat themselves in the unnumbered acts of his spiritual kindness and compassion. A strange and secret divine affinity orders his relations with all.

Equal vision and balance of mind are the forerunners of the dawn of pure Consciousness. Equal vision is the attempt to perceive the same divine Principle in all beings. The beings in the universe are, by their very qualities and actions, dissociated from one another. This is so, because of the predominant factors of their surface-consciousness, which manifest forces that begin to move in different directions.

When a person, or a thing, is perceived with the physical eye, the consciousness-force of the object, whirling in a particular direction, according to the nature of its will, or tendency, to exist, and the perceiver's consciousness which modifies itself into the form of the object, are both influenced by the potentialities and the tendencies of the objectifying forces of each other and, this tendency being different in different individuals, equal vision on the part of the perceiving subject does not become an easy matter.

The aspirant who tries to practise equal vision, therefore, has to raise the level of his consciousness to such a height, through self-denial and protracted meditation, as to be able to overcome the variegated influences exercised upon it by the born tendencies of the objects perceived and the powers that surround it in the universe. The subjective consciousness of the aspirant pierces through this embodied tendency by the power of the intelligent will, and beholds the common Essence lying as the background of all forms. This method of the perception of Unity in diversity, makes the mind balanced, because of the want of agitating factors in the universe and the internal world, which is already cleansed of its rusted matter through discrimination and meditation.

Association with the wise transmits such vibrations of light and harmony, that the crude mind gets influenced by those vibrations, and feels ease on the spiritual path. Even as the sun sheds his light wherever he be, the wise men shed wisdom and peace wherever they go. All those who come in contact with them, quickly get transformed, because the force which they vibrate around them is generated from the pure Consciousness which is God Himself.

Master the Science of Consciousness

The Empire within you is greater than the empire without. Nothing outside you is so marvellous as that which is within you. A sage is one who knows himself, knows the highest divine Consciousness within himself, and is supremely joyous, peaceful, powerful in It. The ordinary man is supremely ignorant of himself, and knows everything outside, except himself; therefore the unhappiness, the misery, the forlornness of ordinary man.

How to Know the Stage of our Evolution

The stage of our culture and evolution is disclosed by the kind of consciousness we have. A person who, while living and working in the world, has a God-Consciousness, has the most beautiful, blessed, inspired, peaceful and perfect life.

The Consummation of Evolution

Not a moving matter-moulded form cast after the fashion of Michael-Angelo's painting, nor the speculative intelligence grappling with the subtle metaphysical problems in the mind of a Plato, nor yet a ‚supreme' aesthetic soul composing undying symphonies like the Benedictus in Missa Solemnis through the being of a Beethoven, but a breathing Spirit that wields wisdom and power, a Presence that pours into us consciousness and delight, is the concluding couplet of the evolutionary Nature's epic.